New City: Catherine Edelman Gallery will present “Lea Lund & Erik K: Nomads,” the artists’ ﬁrst solo gallery exhibition in the United States. The show runs September 17-December 4. Lea Lund & Erik K’s photographic collaboration “is a story about love, a photographer ﬁnding her muse, and a subject claiming his identity,” the gallery relays. “Lea, born and raised in Switzerland, and Erik, born and raised in Zaire, now the Democratic Republic of Congo, met ten years ago on a street in Lausanne and have been together since. Their photographs explore their relationship, the history of Zaire, and the effects of colonization on Erik and his identity.

Tagree: The online magazine for photography & art - A window on the world of visual arts, where artworks from selected artists around the globe are shown and shared as well as information and news from the world of photography and art. 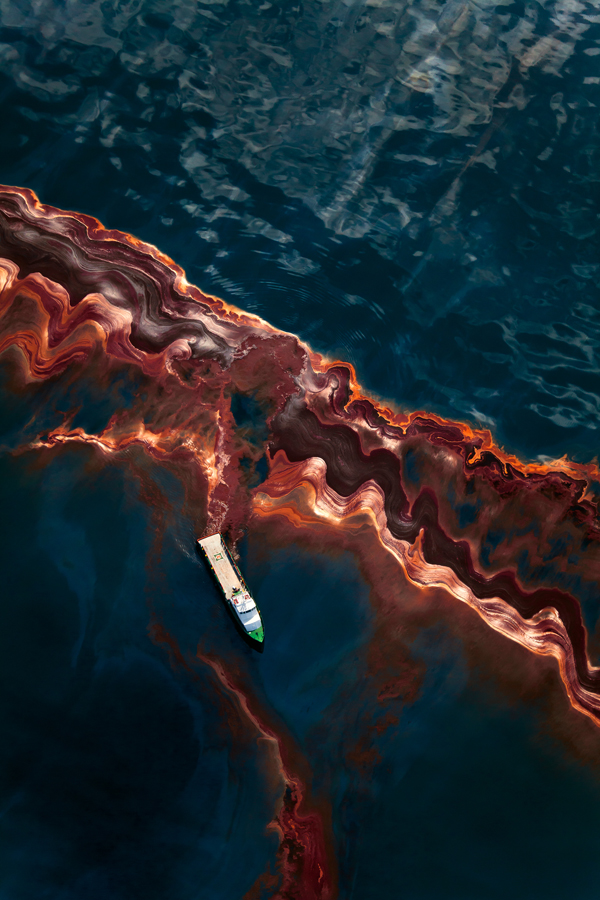 MUSÉE Magazine: FEATURE: SPILL Written by Grace Russell I will never forget the day that news broke of the Deepwater Horizon oil spill in the Gulf of Mexico in 2010. Up until then, I saw the climate through rose-colored glasses and was unaware of how much humanity was damaging our planet right in front of me. Since then, the topic of climate change has become a significant focus in my life and the lives of many others. As the years go by and human errors continue to have disastrous effects, pressing issues are put on the backburner. As we silently sit back and let these disasters happen, our planet suffers. After the underwater gas leak in the Gulf of Mexico two weeks ago, the focus is once again on the oil companies for their negligence of our planet’s fragility. An explosion, aptly dubbed the “Eye of Fire,” generated a devastating cascade of flames on the surface resembling molten lava. According to Pemex, the oil company, the fire was caused by a gas leak from an undersea pipeline that built up in the water, ignited by a strike of lightning. It was put out in just over five hours. While deeply upsetting and condemnable, these disasters also bring opportunities for artists to depict the reality of the situation. Daniel Beltrá, a Spanish photographer, focuses on the human impact on our environment throughout his work. In his collection of images from the 2010 BP oil spill, titled SPILL, Beltrá depicts the unfiltered consequences of these man-made errors while also projecting a critical view on climate change. https://museemagazine.com/features/2021/7/20/oil-spills

Podcast: Light Hunters – Art About the Street, with Clarissa Bonet

Is the light in Chicago different than the light in New York? Can “street photography” set the subjects and control the scene? And just how long should you follow people carrying balloons to get a photograph? These are some of the questions we answer in this week’s episode of the B&H Photography Podcast. https://www.bhphotovideo.com/explora/podcasts/photography/podcast-light-hunters-art-about-the-street-with-clarissa-bonet-and-nina-kling

The Eye of Photography

Catherine Edelman Gallery presents Marina Black : Unseen, the artist’s first solo gallery exhibition in the United States. There are many photographers whose work reveals its intent upon first viewing. Then there are photographers like Marina Black, whose images reveal themselves slowly, allowing the viewer multiple interpretations. Black cites Goya’s The Disasters of War as one of her main influences, which many have interpreted as a protest against violence and the public who remain complicit. Her series Hasard Anticipé (anticipated chance) casts children as the subjects through which fear, joy, trauma and innocence is addressed. In Blacks world, the sanitized assumptions of childhood are replaced by the reality that innocence can be lost when children are not protected. As she states: “I am interested in investigating the complexities of the childhood world, and how susceptible children can be to mental and physical injuries. While there might be joy in childhood, there are also bullies, strangers, loneliness and conflicts that need to be negotiated.”

The Eye of Photography

Francesco Pergolesi‘s series “Stars”  tells the intimate story of the photographer. It simply pays tribute to the women who raised him and helped him grow up. In each image, we find the memory of his mother and all of the women that surrounded me during my life. “They are all angels” says the Italian photographer, originally from Spoleto in the Umbria region. Produced by…