I will never forget the day that news broke of the Deepwater Horizon oil spill in the Gulf of Mexico in 2010. Up until then, I saw the climate through rose-colored glasses and was unaware of how much humanity was damaging our planet right in front of me. Since then, the topic of climate change has become a significant focus in my life and the lives of many others. As the years go by and human errors continue to have disastrous effects, pressing issues are put on the backburner. As we silently sit back and let these disasters happen, our planet suffers. 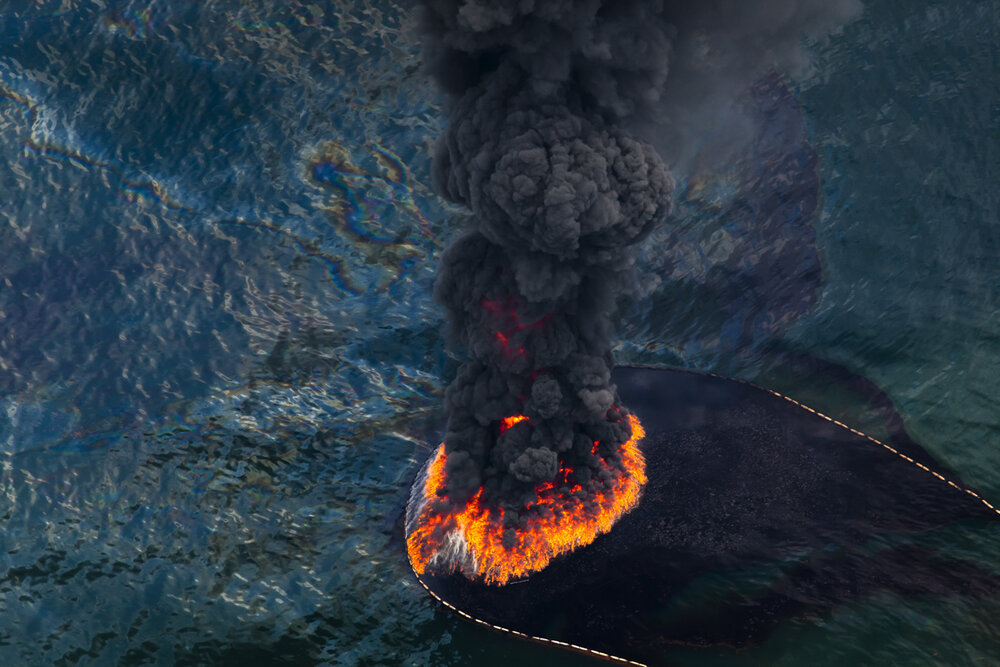 After the underwater gas leak in the Gulf of Mexico two weeks ago, the focus is once again on the oil companies for their negligence of our planet’s fragility. An explosion, aptly dubbed the “Eye of Fire,” generated a devastating cascade of flames on the surface resembling molten lava. According to Pemex, the oil company, the fire was caused by a gas leak from an undersea pipeline that built up in the water, ignited by a strike of lightning. It was put out in just over five hours.

While deeply upsetting and condemnable, these disasters also bring opportunities for artists to depict the reality of the situation. Daniel Beltrá, a Spanish photographer, focuses on the human impact on our environment throughout his work. In his collection of images from the 2010 BP oil spill, titled SPILL, Beltrá depicts the unfiltered consequences of these man-made errors while also projecting a critical view on climate change.

"I have photographed many of the causes of climate change — deforestation, ice melts, mining, fires in the Amazon,” Beltrá said. “BP’s spill in the Gulf of Mexico was one of the world’s worst man-made disasters, and I knew I had to be there to capture it.”

The 2010 tragedy was the worst accidental oil spill in history, claiming the lives of 11 people and thousands of marine organisms. These spills take a devastating toll on marine and coastal ecosystems. Beltrá describes himself as a “conservation photographer” and captures the vulnerability of these disasters through the eyes of an activist.

“I find inspiration in the beauty and complexity of nature. The fragility of our ecosystems is a continuous thread throughout my work,” Beltrá said. “My photographs show the vast scale of transformation our world is under from human-made stresses.”

Each of Beltrá’s SPILL images identifies a different facet of the 2010 disaster, from raging ocean fires to multicolored oil slicks. By utilizing aerial photography, he makes the viewer feel like they are witnessing the fallout in real time. Beltrá said he will never forget his experience of capturing these images.

“The spill happened far from the shore, and no oil was visible along the coastline. Aerial photography was the perfect tool to capture the disaster and is my specialty. The images were taken from a small Cessna floatplane using three digital cameras and an array of different lenses,” he said.

In one of his SPILL images, Beltrá captures the extreme harm these disasters inflict on pelicans and marine life in the Gulf. He shows a hauntingly honest depiction of these creatures huddled together, doused in oil from the calamity.

Beltrá said that his passion for nature began in his childhood, which grew into concern about the human impact on the environment. He realized that he could combine his love for photography with his passion for talking about climate change. He hopes that his photos bring about a deeper appreciation for our world.

“By photographing in remote locations where human and business interests are at odds with nature, I hope to instill a deeper appreciation for our world and an understanding of the precarious balance our lifestyle has placed on the planet.”

Beltrá’s SPILL collection, as well as his other climate series, can be viewed on his website here.