Catherine Edelman Gallery is excited to open its doors with two exhibitions: the first artist collaborative exhibition in its 32+ history, “Photography & _____,” and Michael Koerner: “Hibakusha: A tribute to the 75th anniversary of the atomic bombings.” The shows open July 10 and run through September 4, 2020. To avoid crowds, the opening reception will be from noon – 8:00 pm on Friday, July 10. Many artists will be in attendance throughout the day.

Most art making is a solitary process, void of outside voices, as a blank piece of paper or canvas is transformed into a work of art. But there has always been a rich history of art collectives: a group of artists who collaborate to create work. In the spirit of these collectives, Catherine Edelman Gallery presents “Photography & _____,” an exhibition that brings together photographers and other creatives to create one-of-a-kind pieces. CEG invited artists familiar to the gallery, including painters, writers and photographers, and asked each participant to reach out to a fellow artist to create a collaborative piece. There were no limitations placed on the work, except that photography must be incorporated into each piece.

The concept for “Photography & _____” started late last year, before anyone had heard of Covid-19. It now seems prophetic that after being closed for ten weeks, our first exhibition post stay-at-home is about collaboration. With everyone isolated at home, most of the participating artists relied on Zoom, Skype, and phone calls to create works of art. We are thrilled with the results, and thank the 30+ artists who are part of the exhibition.

View images from the exhibition here. 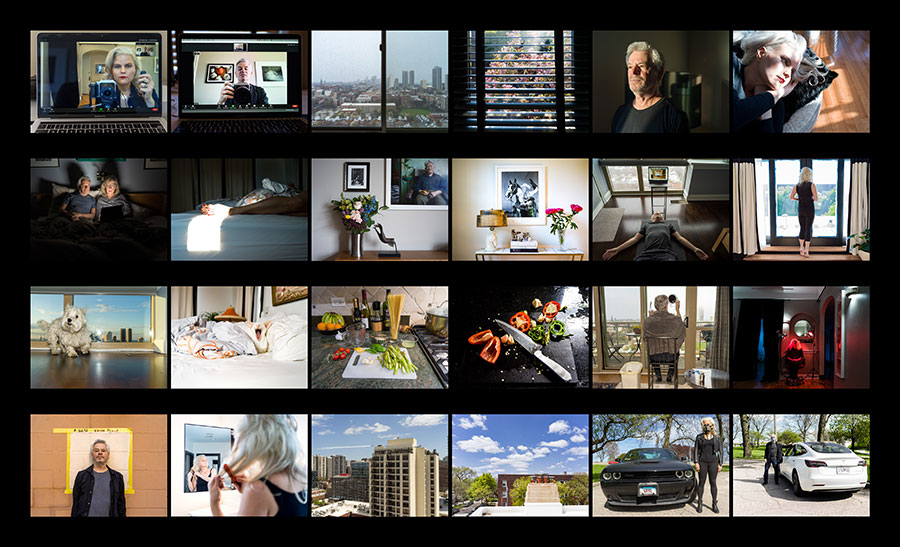 Michael Koerner:
“Hibakusha: A tribute to the 75th anniversary of the atomic bombings.”

On August 6, 1945, the United States dropped an atomic bomb on Hiroshima, and another one three days later on Nagasaki, killing tens of thousands instantly, and more than 200,000 people in total. Michael Koerner was born in Okinawa, Japan in 1963, the son of a Japanese mother and American military father. For the past few years, Koerner has been making one-of-a-kind tintypes about his family and the effects of gamma radiation that has taken the lives of all members of his immediate family. In honor of the anniversary of the bombing, Koerner created Hibakusha, a photographic series that pays respect to those that passed away and those that survived. Hibakusha is a Japanese word that refers to people affected by the nuclear bombings. As Koerner states:

“I wanted to bring attention to those that survived the blast, including my mother, who unfortunately later succumbed to the effects of radiation released on the Japanese people. I decided to make large tintypes that look like families, or people. All the plates are purposely void of color, except silver, which is intrinsic to the tintype process. By eliminating the blue and green hues that are prominent in my recent work, the images take on a haunting glow, reminiscent of the light that appeared in the skies over Hiroshima and Nagasaki. I hope viewers will look at these images and reflect on what happened so many years ago and honor those that survived and perished from this nuclear disaster.”

Michael Koerner’s exhibition will be in our lower level video room, creating an intimate environment for the viewer. Only one person at a time will be allowed in the room, due to social distancing standards.

View images from the exhibition here.